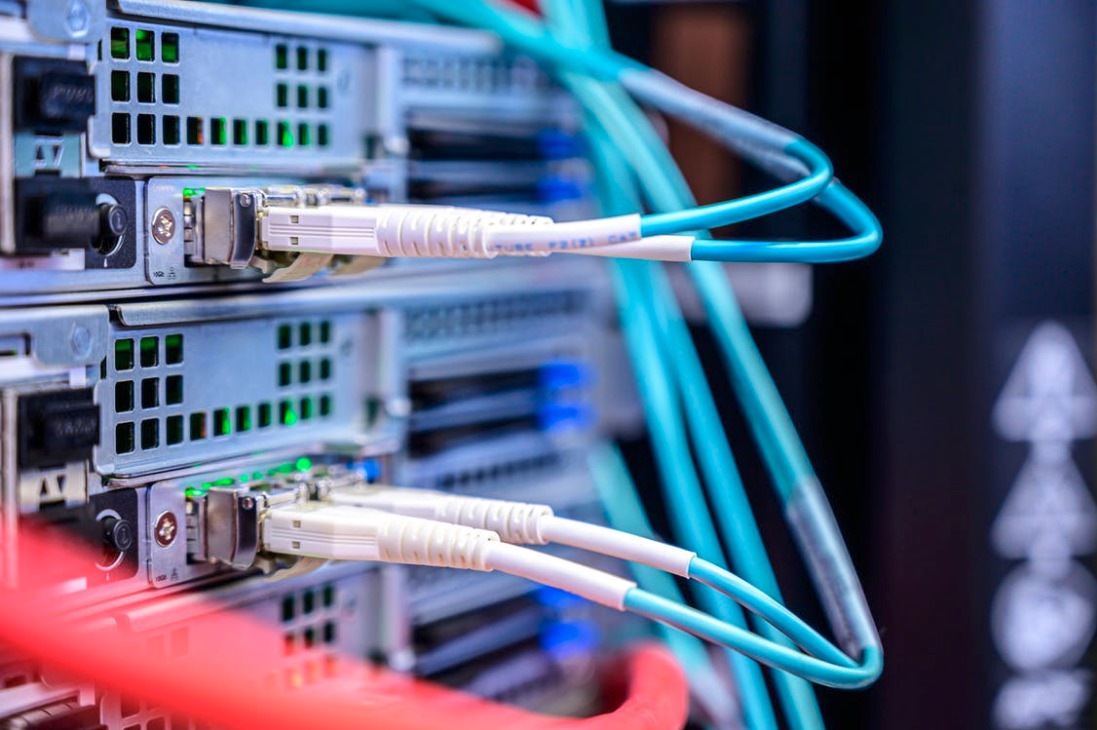 We explain how servers work, what different types there are and which devices are suitable for companies.

Definition: What is a server?

A server is a powerful, central network computer. It makes its resources available to other computers. Functional and infrastructural network services are realized via the server. Data that needs to be accessed by several people can be stored here.

However, the term server has a double meaning. One must distinguish between two different server definitions:

A software-based server is a program that provides a special service. This service is used by other programs – also called clients – locally or via a network.

Servers are often the most powerful computers in a network. Thus they have large hard disk capacities and a fast central processing unit (CPU).

In principle, servers can either operate in a closed (corporate) network or be accessible via the Internet.

Server structure – what are the components of a server?

The structure of a server consists of:

The components show an exemplary structure of a server. Not all of them are absolutely necessary. For example, there are also servers without fans.

How does a server work?

Server services are provided via a computer network based on the client-server model. Tasks are distributed to different computers and made available to several end users independently of each other. Each service provided over a network is provided by a server. The server is working without interruption. Only in this way can clients such as web browsers or e-mail programs actively access the server at any time and use its services as needed.

How a server works

The server thus enters into contact with the client. Both can communicate with each other via a suitable protocol. Through this protocol they speak the same language. The client requests data from the server. The server supplies this. This can be different data – depending on the type of server.

What servers are there?

Server type and how it works

What are the advantages of having your own server?

Flexible data access: All data required in your company is stored centrally. This eliminates the need to search for documents.

Data security: In the event of a hardware failure, data that is only stored locally on one computer is quickly lost. A server protects against this loss of data, because even in the event of a hardware failure, all data is retained.
Improved performance: Since you do not have to share your server with other customers, as is the case with shared hosting, you get full performance with your own server. As a result, you often have shorter loading times.

Less congestion and downtime: In the shared hosting space, congestion is a key problem. The server’s resources are shared and so the entire server can quickly become overloaded.

When does it make sense to have your own server?

If you want to share data in your company network, the acquisition of a server is recommended. Be it e-mail communication, the administration of customer databases or fast access to the online store. Smaller companies can benefit from the purchase of a server just as much as large corporations. Because data loss can happen anywhere. A server facilitates the work in the company and contributes a great deal to data security.

Buying a server – what should I look out for?

As the number of digital processes increases, so do the demands on the server. But what do you have to look out for when you want to buy a server? Or, if you consider  renting a server (VPS), you need to evaluate the same questions.

Which server fits your requirements? There are many different servers. They differ primarily in terms of size, performance, reliability and power consumption. Therefore, IT managers should ask themselves which and how many applications are to run via the server.

The number of users is also important in choosing the appropriate server. How many users will be using the server? And how many transactions will take place?

What is the power consumption of my selected server? In an overall comparison, power consumption over the lifecycle of a server accounts for about 70 percent of the total cost. Therefore, you should also think about energy efficiency. You may want to pay particular attention to energy efficiency in your servers. This ensures that the server remains profitable for your company in the long term.

How loud is the server? If a server is located in the office, you should of course also pay attention to the noise level. The server should operate quietly so as not to disturb the concentration of employees. Good servers usually operate particularly quietly – so as not to disturb ongoing operations. With VPS this question is superfluous.

The expansion possibilities: Your company wants to grow – so of course the server should be able to grow with it! Make sure that the server can be upgraded. With VPS the solution would be a scalable cloud server.

Service: A server is only as good as the service it offers. Extensive technical support is essential if you want to buy a server. Some providers have many years of experience in developing and producing IT solutions – those will be happy to pass this experience on to you. Their competent service team will be happy to advise you!

How much RAM? How much RAM a server needs depends on what you want to use it for. For example, servers tailored to companies usually promise smooth processes with about 8 GB.